By Group 4 NetworksAugust 5, 2014IT Miscellaneous Support
No Comments 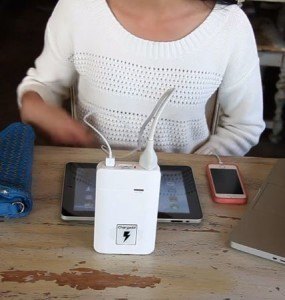 In the world of smartphones and tablets, battery life is king.

For that reason alone, portable chargers are already a hot commodity (in some cases, quite literally, as one even charges devices using fire).

Among your portable charger options, ChargeAll, a company that provides charging stations for offices, restaurants and hotels, claims to stand out from the rest with what it calls the “smallest portable power outlet” you can buy.

ChargeAll’s claim comes entirely on the back of another: the ChargeAll portable power outlet is the first portable charger that boasts a wall power outlet, eliminating the problem of needing to search for one in an airport or cafe.

In addition to the wall power outlet, like most other portable chargers, it features ports for micro USB or Lightning cables. With both the wall power outlet and the USB outlet, the portable charger should be able to charge all of your devices — laptops, tablets and smart phones — though any device that requires more than 85 watts of power (such as a microwave) will not work.

The ChargeAll portable power outlet comes in two different sizes: Portable (the smaller size) and Powerful (the largest size). The small size claims to be only slightly bigger than an iPhone 5S, while the large model is about an inch longer and wider and includes an additional USB port.

You can get a small ChargeAll portable power outlet by donating $99 to ChargeAll’s Indiegogo campaign. If you want the large model you’re going to have to donate $139.

Overall, the company has had success with its crowdfunding campaign. With 12 days left, ChargeAll has already surpassed its initial $30,000 goal, raising more than $94,000 as of this writing.