By Group 4 NetworksJuly 29, 2014Websites
No Comments 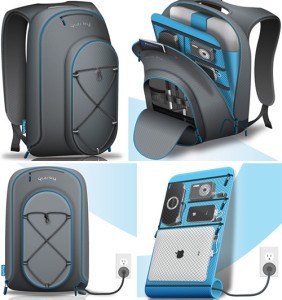 Free wifi is the greatest thing to happen to airports since those electric carts that whisk you to the gate when you’re late for your connection. But what’s holding most people back from getting any work done while waiting for a flight is the lack of power outlets. Some airports are better than others, but for the most part you don’t want to drain your gear when you’ll need it powered up to keep your sanity on your actual flight.

But someone out there has come up with a pretty reasonable solution, and once again it will hopefully be brought to the market one day via the assistance of Quirky. The Trek Support backpack of course has loads of room for holding a 15-inch laptop and all your gadget accessories, but the heart of its genius is a removable gadget dock that can not only hold a plethora of gadgets, but also charge up to 3 of them at the same time. The ‘secret’ is a rechargeable battery good for about 7 hours of sharing the power love, and from the looks of it it also doubles as a power bar, allowing you to top off multiple toys from just a single free outlet.

It’s also TSA and checkpoint-friendly but to be honest that means nothing to me since it all depends on who you’re dealing with. If an agent wants your laptop removed, you’re gonna have to remove it. But still, the bag seems immensely useful for traveling gadgetphiles, and it’s available for presale now for just$130. Of course you and about 1,024 more people will have to make a commitment before it becomes a reality, but less useful stuff has sailed through the Quirky approval system.