By Group 4 NetworksAugust 18, 2014November 19th, 2015IT Miscellaneous Support
No Comments 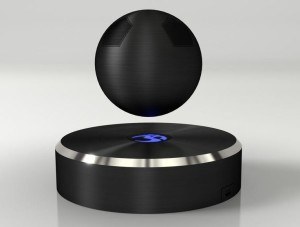 It seems like everybody has at least a couple of Bluetooth speakers hanging around, and most of them are the usual cylinders that just sit there. Sure, they work OK, but they don’t wow you with design. If you really want an impressive-looking Bluetooth speaker, you might want to check out the Om/One, a gravity-defying gadget.

The Om/One consists of a base and a round speaker that levitates above it, spinning gently, thanks to a magnetic base. You can grab the sphere and take it with you as a portable speaker or let it hang out above the stand and play audio. It also includes a microphone so it can be used to conduct phone conversations as well. The battery life of the final version is expected to be up to 15 hours, which would be impressive even without the magnetic levitation trick.

Om Audio has created prototypes of the Om/One, and is running a crowdfunding campaign to put the speaker into production. The campaign launched today and is already more than halfway toward a $100,000 goal with 49 days left to run. Early backers can get in on the orb action for $179. Delivery is estimated to be in December of this year.

Om/One is available in three colors: basic black, basic white, and get-your-bell-bottoms-on disco ball. Get the disco ball, even though it’s going to cost you a $299 pledge. All you’ll need is a pin-spot and some Bee Gees MP3s to turn your room into a ’70s dance party.

There are cheaper Bluetooth speakers out there, but the Om/One isn’t trying to compete with them. It’s trying to set its own market based on the cool factor of pulling off a sci-fi-style flotation stunt. If the sound quality is as good as Om Audio says it is and the battery life is truly long, then Om/One should have no problem carving a niche out of thin air.