By Group 4 NetworksJune 24, 2014July 17th, 2014IT Consulting, IT Outsource, IT Support in Toronto, Managed IT Services Toronto, Toronto IT Support
No Comments 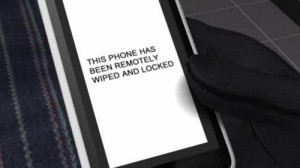 Cell phone thefts are hard to prevent and hearing a friend say they lost their phone is nothing new. We’ve written about managing your cell phone and what to do if it was to get lost or stolen, https://www.g4ns.com/managing-smart-phone-theft. The technologies we’ve written about are still good but they lack true security against the physical device itself.

One can remotely erase their phone, however if the thief is still in possession of that phone, he could continue to use it as a brand new phone, without your personal data, which is usually stuff they wouldn’t care about anyway. To the thief it is the physical devices that matters, as they’d keep it for themselves or would attempt to sell it.

New security technologies allow a lost or stolen phone to be remotely erased, however there’s a twist. The twist is has a term and it is “kill switch”. With kill switch methods for security, if the phone was recovered, the owner would have to enter the same email account and password as they have used on the phone before it was lost or stolen, before they could use the phone again. Only the phones true owner would know the email account and password which was associated to the phone.

Apple has started using this anti-theft technology recently, and in certain cities iPhone thefts have gone down. Now Google and Microsoft want to join the same bandwagon, to employ better security technologies such as the one Apple is using. Within the Android world, third party applications already exist to fully lock down phones, and would make the thief enter a recovery pin to get the phone back to its normal working state, which they probably won’t know.

If you’d like more information on managing lost or stolen cell phones, and would like to know which specific applications can help assist you, feel free to contact Group 4 Networks.