By Group 4 NetworksAugust 1, 2014IT Miscellaneous Support
No Comments 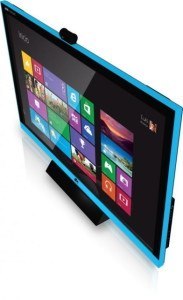 Apek of Brazil (coincidentally, the word “Apek” also means “uncle” in the Malay archipelago) has just launched a large screen Windows 8.1-powered PC-TV that is called Maxpad. Not the most exciting of names, this I know, but if it works, then why not? Large sized touchscreen Windows 8 PCs have gone on sale before, but majority of these, if not all, have mainly targeted the business market. Well, the Maxpad from Apek will arrive in three sizes – 39”, 50” and 64.5” models, where all three of them feature touchscreen displays at Full HD resolution.

Apart from that, Apek will also ship the TV with a custom color of the buyer’s choice. Underneath the hood, you will be able to find an AMD A10 processor alongside a Radeon HD 7660 GPU, 8GB RAM, support for 60GB SSDs or a standard issue 500GB hard drive, as well as a 5MP camera that caters for those video call moments.

Other than Windows 8.1, the Maxpad will also come with its fair share of software programs that will allow one to snap screenshots of the current TV show that plays, before manipulating that saved screenshot via an art program. One can also send such an image over to a social network account in order to generate chatter. Last but not least, a DVR feature lets you rewind live TV shows for up to 2.5 hours prior, now how about that?

Group 4 Networks is excited to share the new Maxpad. Imagine being able to use all the benefits of a tablet at the size of a TV. Contact Group 4 Networks today to see how the Maxpad can be incorporated in your company, office or business.