Comparing the Surface Pro 3 to the MacBook Air

By Group 4 NetworksAugust 13, 2014IT Miscellaneous Support
No Comments

Comparing the Surface Pro 3 to the MacBook Air 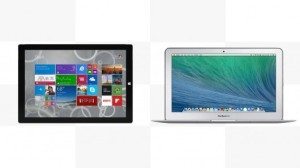 Microsoft has decided that the best way to fight Apple is to take on the company with a direct attack. First, Microsoft targeted Apple’s Siri with a series of ads showing how its own virtual personal assistant, Cortana, can perform more tasks than Apple’s alternative. Now, though, Microsoft has decided it’s time to take the fight to the MacBook Air with ads that showcase how its own Surface Pro 3 is, in the minds of the Redmond, Wash.-based company, a better option for consumers. The ads, while admittedly one-sided, examine the key features that Microsoft believes set its own products apart in the marketplace. Microsoft contends that the Surface Pro 3’s touch-screen, the device’s Intel Core i7 processor option and other aspects of its design make it more suitable for consumers. Apple, at least so far, has yet to respond publicly or launched an ad campaign of its own taking aim at Microsoft’s claims. Frankly, that isn’t Apple’s style. At this point, it’s a one-sided conversation that doesn’t pretend to be an objective comparison of what the two devices offer to buyers. This slide show aims to carry that flag by comparing 10 key features in both devices. It’s up to buyers to decide which device best suits their needs.